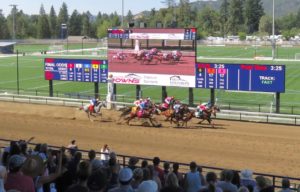 Grants Pass Race Track has shut down their operations and will not run a meet in 2022 that was scheduled to begin on May 9th. Rumblings began when the State of Oregon would not approve gaming machines for the operators of Grants Pass to help with revenue to run the races. Oregon tribes opposed the gaming machine license and the state agreed and denied the request for those machines.

Here is a press release from the owner of Grants Pass Downs Travis Boersma released the following statement after meeting with Horsemen and women and employees today:

GRANTS PASS, Ore. (April 12, 2022) – Grants Pass Downs announced today it will not hold the 2022 commercial race meet as planned. The race meet was originally announced in February.
“As a result of the Oregon Racing Commission’s vote to deny an operating license to The Flying Lark, Grants Pass Downs has lost its economic engine,” said Travis Boersma, owner of Grants Pass Downs. “While we remained hopeful we would be able to host a viable race meet, the uncertainty here and across the industry has resulted in a drastic reduction of race horses at Grants Pass Downs. At this point, it’s clear running the meet isn’t feasible.”
Grants Pass Downs became privately funded by Boersma beginning in 2019. The track, race meet and purses were intended to be funded by profits from The Flying Lark entertainment venue. Despite going on record outlining its disagreement with the motion, the Oregon Racing Commission denied a license for The Flying Lark at the urging of Oregon Governor Kate Brown and Oregon’s attorney general.
“This is the result of the state and its leadership’s lack of understanding of, and appreciation for, the equine industry and the needs of rural Oregon. I believe this is just the beginning of a ripple effect that will be felt in communities throughout the state due to the actions of leadership.” said Boersma.
The cancellation of the race meet will lead to the elimination of approximately 50 jobs during the racing season. Employees were notified Tuesday, as were the horsemen and horsewomen on site. Those jobs are in addition to the more than 200 lost with the denial of The Flying Lark.
“Saving horse racing in Oregon has always been one of my top priorities. Moving forward, it’s my sincere hope the horsemen’s associations, private investors and the state can come
together to find a path to continuing this sport.” 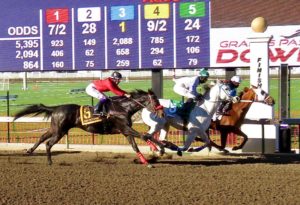 This leaves the state of Oregon with only a few fair meets and a total of 9 race days for the year. Grants Pass became the anchor of racing after Portland Meadows closed in December of 2019. The future of thoroughbred racing in Oregon is now officially on life support. Grants Pass was the only option for regular race dates and a season.
Connections with horses at Grants Pass will now vacate and look for other venues to race such as Emerald Downs which opens its 2022 season on May 15th.
www.elisportsnetwork.com

Tue Apr 12 , 2022
It was something special, and our guys in Europe dropped their jaws Paul Beattie